From new lands of mystery and wonder. 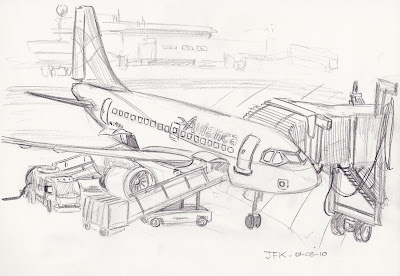 And so it is that I no longer reside in the garden state or the USA for that matter. I moved back to my home country of Uruguay, land of green acres, cows, lots of meat, mate and the terrific guitar virtuoso Don Martin Carbajal, master of the six strings. Here I give you a couple of things from the airport hours. The whole flight took like 19 hours, and in the down time between meals and in-flight movies I managed to cough up this two, one of them is an actual portrait and the other is more like an artist´s rendition, but I´m not telling which one its which, I´ll make this interactive and leave it to you to decide it ^_^ 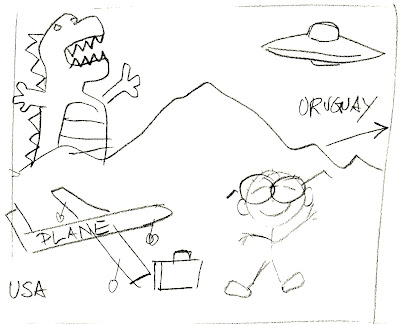 I still have to write a little more about the whole trip and all the process that went into making such a dumb move. For now it´s a world where the days are hot and humid and the nights are about weird noises in the company of strangers in a cyber, driving fast in cars that they don´t own or blowing up the heads of terrorists while they cheer each other based on such accomplishments.

Life it´s a very weird thing and its full of stupid decisions we make all the time. Someone said that the measure of a man its made based on the decisions he makes and how he reacts to them.

decision noun (CHOICE)
/dɪˈsɪʒ.ən/ n
[C] a choice that you make about something after thinking about several possibilities

Let´s see what lays in my future.
More to come.
Posted by Lisandro Di Pasquale at 11:46 PM

Email ThisBlogThis!Share to TwitterShare to FacebookShare to Pinterest
Labels: about me, flight, news, personal