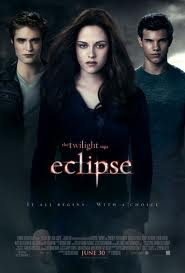 Just watched “ECLIPSE”, the third installment in the Twilight saga. Now, as a short disclaimer I haven’t seen anything form the other two besides the trailers.

This is the third one and I’m pretty sure that I got most of the story, what does THAT has to say about it?

So vampires are white and elegant and werewolves are Indian and poor (because they can’t afford shirts). A leading character of each side is in love with a regular girl, so in order for them to get her they fight each other and put their clans against one another. Except that the vampires of the clan Cullen are good hearted and they really don’t want to ruin the young girl’s life.

I wouldn’t call myself a scholar or anything but I have seen and read my share of vampire stories and I think I have their mythology pretty well understood. That said:

I’ve never seen vampires that glitter in the sunlight.
Except counted cases I’ve never seen vamps that can walk freely under the sun.
I’ve seen them countless times burn down and turn to ashes. I have NEVER seen them break down like porcelain (is it because they are sensitive beings?)
I’ve never hear of someone turning into a vampire because he had a hand cut from a bloodsucker.
I never heard the expression: A newly born vampire is one of the most powerful entities in the universe…

There’s a couple of things more, the vamps are loaded, presumably because they had such long lives and they might have learned a thing or two about money and the benefit of saving/investing. Also, they are beautiful, men and women, and oh, yeah, they are mostly young, even the elder ones look like they just graduated from high school.

Werewolves on the other hand are savages, walk around ‘naked’, have shitty cars and presumably no money. Not to mention brown skin and strong features. Also, they seem to stink. I hope I didn’t leave anything out.

As you all know the Twilight saga is intended towards an adolescent crowd, conformed mostly by girls. It doesn’t surprise me the fact that the story or the characters tell NOTHING to me, but that shouldn’t shock me or anyone because I’m not a teenager no do I have a vagina.

For some reason chicks love the idea of two handsome fellows fighting over them without getting any of it in return (but they are more than happy to give some of it away). In my times it was a lot easier to get laid or to get romantically involved, but has the movie succeeds pointing out: times change.

Also, there seems to be a sub-plot involving a series of murders in Seattle that lead into the creation of an army of vampires with the sole intention of getting Bella. It seems that there is always a reason to go after her, but that, like Luke Skywalker trying to be devoured by some creature, it’s just a given. Anyway, we care about the romantic plot, not the rest, don’t we?

A few years back we had a similar reaction from the female crow when ‘Interview with the vampire’ opened in theaters across the globe. It starred TWO very hot guys (Cruise and Pitt) and it also showed a sensitive side of these troubled creatures that drove them completely nuts. I mean, they even got turned on by Antonio Banderas as a gay vampire.
Of course, “Interview—“ is a great movie that I will happily watch at any time, while I will try to steer away from eclipse for the rest of my life. And to top the good news, they plan to end the saga by splitting the last book "Breaking Dawn" into TWO movies. Yeah, because we really need more!

Did I ever mentioned that the author of the books is a woman?

As sad and little and pathetic a human being as I can be I’m totally down for a romantic movie. Hell, I’ll take my girlfriend to see them if I had one. In this particular case, I feel sorry for the innocent guys that get driven into a theater to watch this because of the girlfriend.

All in all this is not a complete waste of time, even though the ‘special’ effects are laughable. It might be worth watching it in a Sunday afternoon, on the cable, locked in your house because a blizzard won’t let you out. Other than this scenario, don’t waste your time and specially your money on this.

Now, if you happen to be a teenage girl, like you should totally go and watch it…

…but let’s be real, girls like that don’t read this blog.

P.S: One good finding in this movie was Anna Kendrick, the girl I fell in love with in ‘Up in the air’, who also happens to be in ‘Scott Pilgrim Vs. the world’
The review comes late thanks to the retarded release schedule of movies in south America, a place where a movie titled “The expendables” winds up named “The indestructibles” Oh, the humanity!
Posted by Lisandro Di Pasquale at 12:19 AM No comments: 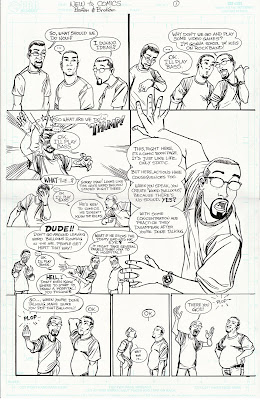 To my friends Ronnie and Mohamed.
Posted by Lisandro Di Pasquale at 10:49 PM No comments: 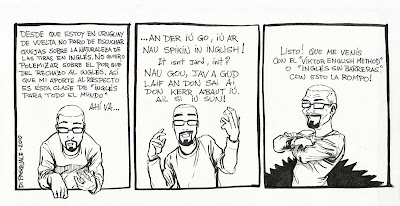 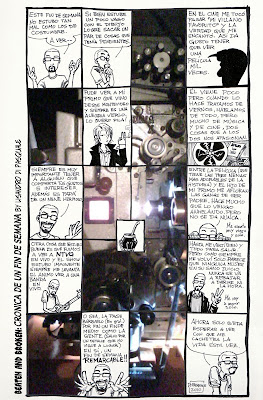 Spanish wil be showing up a lot more in the blog in the future. I'm going to be working on some new material that will be all in Spanish. My brain is wired to work comics in English so I want to get used to do it in Spanish too. Sorry if you don't understand, but truth be told, there's far more material in English than in Spanish here, you won't run out of options to read.

I've been working like a madman to speed up the completion of the new issue. Yesterday I finished the inks and today I scanned everything, the lettering phase it's just around the corner and then off to the press so you can get it.

Since I was so rabid at work this time I didn't save any of the pencils (I know, dumb mistake) but since this was a particularly excruciating experience I was more concerned about finishing it than to save material for the upcomig sketchbook. 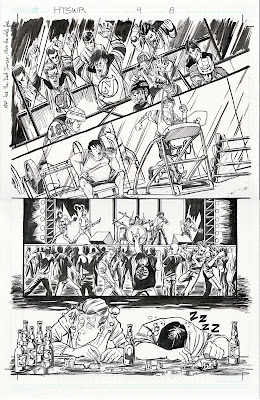 Anyway, here I leave you a couple of pages as always for you to take a little glimpse of what is in store for our beloved cast of anti-workers. 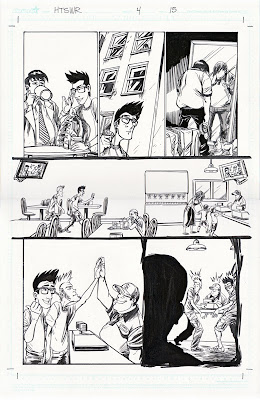 I will be back soon with some more material. Until then, have a good life.
Posted by Lisandro Di Pasquale at 8:04 PM No comments: 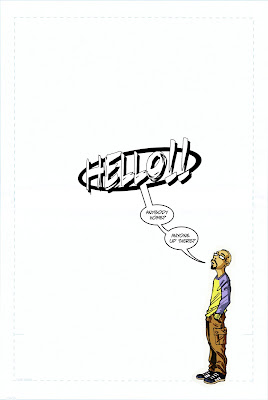 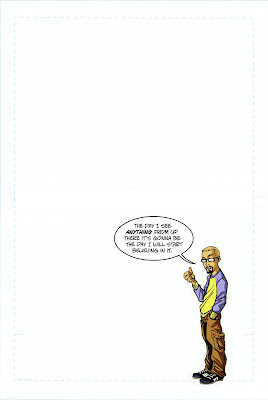 That's all you need to know on the subject.
Posted by Lisandro Di Pasquale at 11:50 PM No comments: