This is the skinny. As some of you might know I work as a projectionist in a movie theater. During winter's break I was confined to work without a break for two weeks straight, putting up days of 8 to 12 hours a day.

That kept me away from the drawing table and unable to make any progress on the things I should be making (i.e. HTSWR, Hadron Colliderscope). I also refused to stop drawing because when you stop you can get a little rusty. My sketchbook came with me and stayed there for the duration.

In that time I decided to make something fresh for me, to keep some sort of record of what was going on in my head at any given time. Like some of the indie artists I've been reading of lately. This way I opened this 'stream of conciousness' and without much planning procceded to put it in paper. 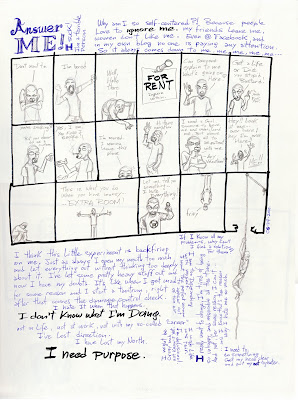 In my own words it is nothing more than just a pompous, pretentious and self-indulgent diatribe about life and how unfair it is.

It was also cathartic.

I really don't hope for you to like it, it was merelly made for myself, but since I kinda dig it it's going to become a part of the finished version of the book, so you might as well give it a look now.

Follow the link to download it and if you don't have it you can get a little program called CDisplay to open it or just use Winrar. It's the same with the comic I posted a few days back [you can also get that one], only that that one is in Spanish and this one is in English.

"If you don't have this sort of conflict IN or AROUND you, then you just have to make it up"
Jack White
Posted by Lisandro Di Pasquale at 8:35 PM

Email ThisBlogThis!Share to TwitterShare to FacebookShare to Pinterest
Labels: about me, Beaten, comics, personal, portfolio, sketchbook