Another page of the continuing book that gives its title to this blog.
please enjoy. 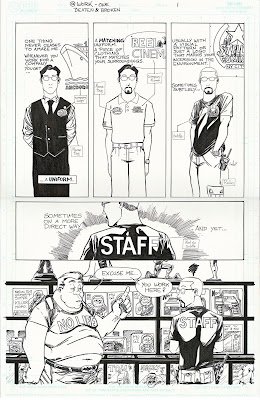 A whole new thing it's coming, but be warned, it's going to be all in Spanish.
Posted by Lisandro Di Pasquale at 11:42 PM 4 comments:

Email ThisBlogThis!Share to TwitterShare to FacebookShare to Pinterest
Labels: about me, Angel Negro, news

How to survive making comics

here is a picture montage I made from the roof of the theater where I work. This is my home town. Hope you like it.
Posted by Lisandro Di Pasquale at 10:12 PM No comments:

Email ThisBlogThis!Share to TwitterShare to FacebookShare to Pinterest
Labels: about me, personal

Well, it has been a while since I posted any comics in here, haven't it?
Here you have a glampse behind the courtains of what it was like when I used to work at the comic book store in NY. Right now I'm working on a few things for here and other places, so rest assured there's more to come. 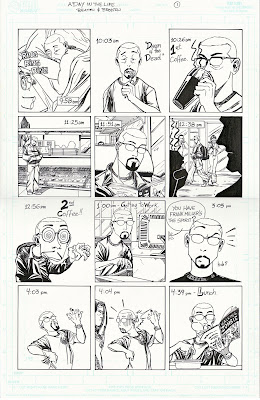 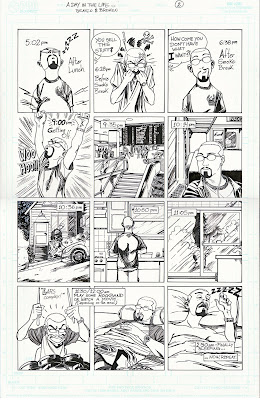 These pics leaked throught the net and I mannaged to snatch them for you.
This is conceptual art of the costume, and I read somewhere before that some guy from 'Ain't it cool news' got to see it and he described it online, a couple days after the pics showed up. Here you have them, they DO look cool, don't they? 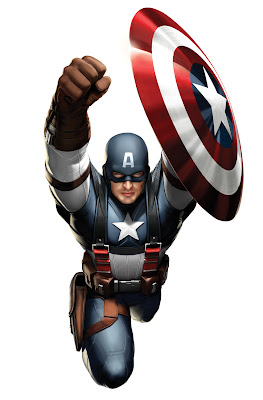 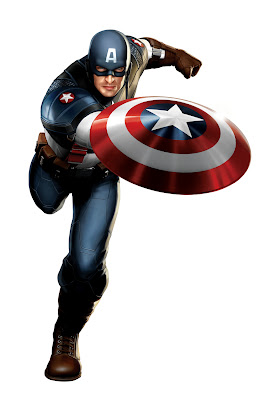 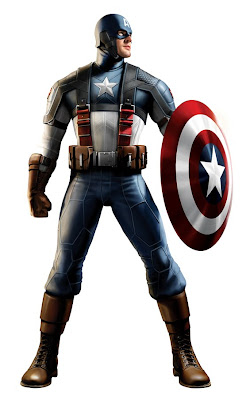 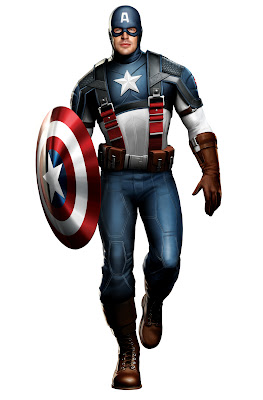 YAY!! ^_^
Issue three of "How to survive working in retail" it's complete and should be on its way to you in a couple of days on both formats, paper and digital, for my mates are about to print it in the states (make sure to go and buy it) and I will upload it everywhere somewhere this week.

It's very good news because I already started working on issue four, and I'm glad to say that I'm already up to page 5 in the pencil stage. I'm waiting for more paper to continue, here I leave you with a couple pics as a tease. 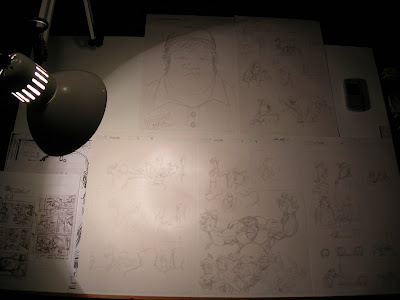 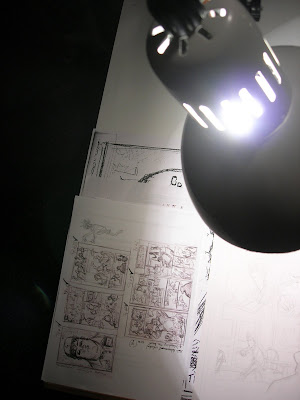 Also, this baby has been up for six months now. Wow, It feels like a hell of a lot more, but it sure has been fun though.

As my gift I leave you this little homage I made a very long time ago to a great movie using great characters, hope you like it. 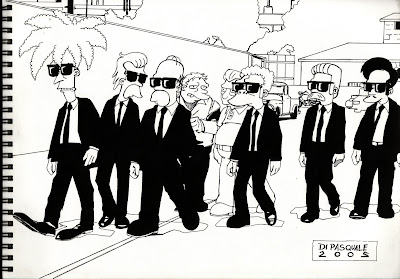 Thanks for sticking around and let's hope for a brighter future.
More to come...
Posted by Lisandro Di Pasquale at 6:40 PM 2 comments:

Email ThisBlogThis!Share to TwitterShare to FacebookShare to Pinterest
Labels: about me, news, rambling man, studio

About the End of LOST.

The journey it's over, but what happened really? 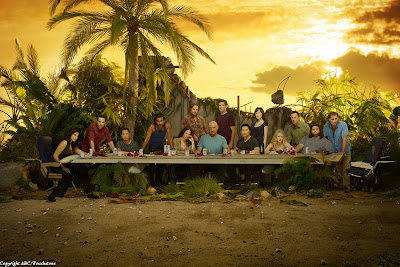 So LOST finally ended. Now what?!

After watching the ending I felt confused to say the least. I, like millions of people more was also a big fan of the show, and as much as I regret it, not from the very beginning. I started watching it halfway through season 2, right when they were coming back from the mid-season break. I wasn’t familiar with ANY of the concepts or any of the characters from the show, and to be honest I hadn’t met anyone who was actually following the show. But I started anyway and got hooked right away. So much so that after watching season’s 2 ending I went out and got me season 1 on DVD. I haven’t let go since then. 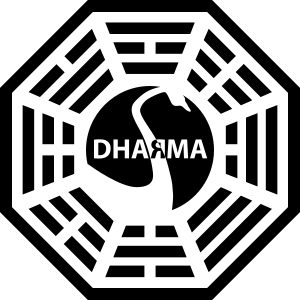 But then it ended, and instead of giving us straight answers it open more doors and let a lot of loose ends. To be honest, after the show ended I felt stupid. I wasn’t sure if it was me that just wasn’t able to follow the story or if they were way too smart and [the writers] crammed the finale with references and allegories that where evading my mind. It was like watching Evangelion all over again, following 22 episodes of robots fighting each other to suddenly being thrown into the mindscape of the characters. It didn’t make any sense at all.

I mean, I knew right there that I was stupid enough to realize that there were a million psychological implications to that ending that were fleeting me because of my inexperience in that field in particular and in life in general.

Flash forward to this, it baffled me to be in the same spot so many years later, after getting more experienced, after living and seeing so much. Was it me or was it them then?

Evidently there was something wrong. After the event pixels poured over the internet, they where the voice of disgruntled viewers, not only hardcore fans, but people that have been following the show over the years and now were left alone, clueless. 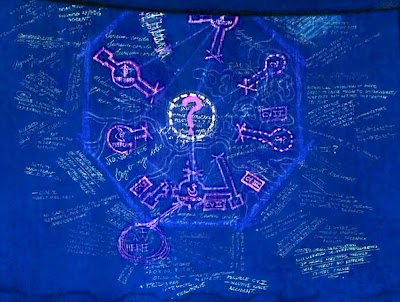 Truth be told, after investing yourself into a show for six years, you want something a little more fulfilling. Battlestar galactica comes to mind, after four seasons they managed to give you a better ending. It might or might not be the ending you where expecting or you might have wished for, but one thing was for sure, it was more solid than the one we got after six years of lost.

Yes, there are things that you have to find out for yourself. The thing with the good and evil, the recurrence of certain characters, the traits of the candidates and so on. It was all fun and games, until episode 6-17/18 – The End. Yes, they are all dead, but why and when did that happen?

I’m not gonna postulate any thoughts or ideas of my own, my head’s still trying to wrap itself around the whole thing (you see, I don’t want to feel robbed and disappointed, I just don’t) but I found this online. This is supposedly an explanation made by a guy who had allegedly worked on the show as a writer. Apparently he was sacked like three years ago but still knew what was going on from the inside.

There are too many if’s and loose ends and maybes, I hope this can shed a little light on the ones like me had a rough time with this. There are a few statements in this body that contradict some points of the show, but over all seems like a fine assessment over this convoluted finale.

I still wonder though; Why was Penny with Desmond in purgatory? ^_-

Here comes the whole chunk written by this guy (not me) with no name.

First … The Island:
It was real. Everything that happened on the island that we saw throughout the 6 seasons was real. Forget the final image of the plane crash, it was put in purposely to f*&k with people’s heads and show how far the show had come. They really crashed. They really survived. They really discovered Dharma and the Others. The Island keeps the balance of good and evil in the world. It always has and always will perform that role. And the Island will always need a “Protector”. Jacob wasn’t the first, Hurley won’t be the last. However, Jacob had to deal with a malevolent force (MIB) that his mother, nor Hurley had to deal with. He created the devil and had to find a way to kill him — even though the rules prevented him from actually doing so.
Thus began Jacob’s plan to bring candidates to the Island to do the one thing he couldn’t do. Kill the MIB. He had a huge list of candidates that spanned generations. Yet everytime he brought people there, the MIB corrupted them and caused them to kill one another. That was until Richard came along and helped Jacob understand that if he didn’t take a more active role, then his plan would never work.
Enter Dharma — which I’m not sure why John is having such a hard time grasping. Dharma, like the countless scores of people that were brought to the island before, were brought there by Jacob as part of his plan to kill the MIB. However, the MIB was aware of this plan and interferred by “corrupting” Ben. Making Ben believe he was doing the work of Jacob when in reality he was doing the work of the MIB. This carried over into all of Ben’s “off-island” activities. He was the leader. He spoke for Jacob as far as they were concerned. So the “Others” killed Dharma and later were actively trying to kill Jack, Kate, Sawyer, Hurley and all the candidates because that’s what the MIB wanted. And what he couldn’t do for himself.
Dharma was originally brought in to be good. But was turned bad by MIB’s corruption and eventually destroyed by his pawn Ben. Now, was Dharma only brought there to help Jack and the other Canditates on their overall quest to kill Smokey? Or did Jacob have another list of Canidates from the Dharma group that we were never aware of? That’s a question that is purposley not answered because whatever answer the writers came up with would be worse than the one you come up with for yourself. Still … Dharma’s purpose is not “pointless” or even vague. Hell, it’s pretty blantent.
Still, despite his grand plan, Jacob wanted to give his “candidates” (our Lostaways) the one thing he, nor his brother, were ever afforded: free will. Hence him bringing a host of “candidates” through the decades and letting them “choose” which one would actually do the job in the end. Maybe he knew Jack would be the one to kill Flocke and that Hurley would be the protector in the end. Maybe he didn’t. But that was always the key question of the show: Fate vs Free-will. Science vs Faith. Personally I think Jacob knew from the beginning what was going to happen and that everyone played a part over 6 seasons in helping Jack get to the point where he needed to be to kill Smokey and make Hurley the protector — I know that’s how a lot of the writers viewed it. But again, they won’t answer that (nor should they) because that ruins the fun.
In the end, Jack got to do what he always wanted to do from the very first episode of the show: Save his fellow Lostaways. He got Kate and Sawyer off the island and he gave Hurley the purpose in life he’d always been missing. And, in Sideways world (which we’ll get to next) he in fact saved everyone by helping them all move on … 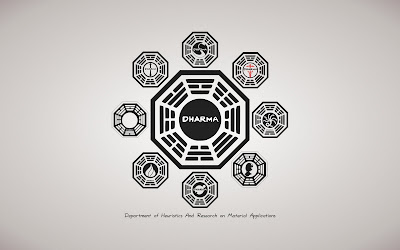 Posted by Lisandro Di Pasquale at 6:18 PM No comments: