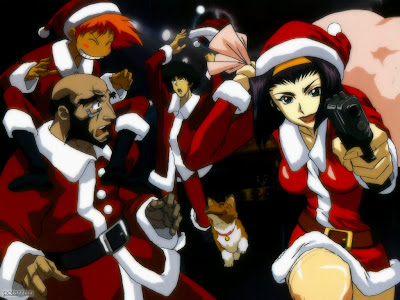 See you in space cowboy...
Posted by Lisandro Di Pasquale at 3:36 AM 2 comments:

Email ThisBlogThis!Share to TwitterShare to FacebookShare to Pinterest
Labels: cosas 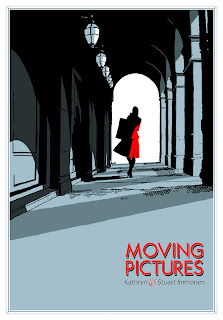 At some point I can say I´ve reached some peace of mind. Yes, I´m bored out of my brain with my dead end job, but lucky for me that is gonna be over soon. The good news is that I was finally able to find two books I´ve been looking for a long time now. One of them is called MOVING PICTURES and it’s a graphic novel made by Stuart and Kathryn Immonen. It was published by Top Shelf in 2007 and when I heard of it I was already in Carmelo (a.k.a no-comics-for-you-town). I spent a lot of time and effort trying to find this online, but let´s be honest: If I don´t have a credit card how am I supposed to buy it form amazon?? Here´s where the piracy comes in handy, just that it seemed that no one had scanned it, so it took me a couple years to finally find it. And now I got it…SUCCESS!!! 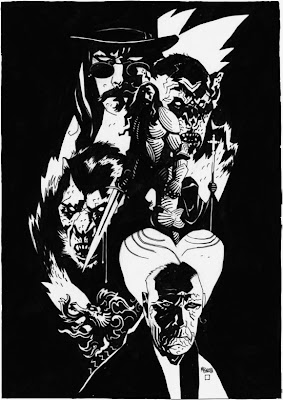 The second piece that piracy has granted me is the long out of print and very hard to find Bram Stoker´s Dracula, the movie adaptation made by Mignola when the Coppola movie was released. I looked for it all over the place, here, there and everywhere, even people I used to work with at midtown comics had never heard of it. I remember one time, many years ago, I had it as a hard cover book in my hands and decided not to buy it (what a douche). Ever since that day I´ve been looking for it. I perused the web searching for the scans without any results, until last night. There they were, the four issues, waiting for me to download them AND IN ENGLISH!!! The blessing, the relief, what a tremendous catch for one night. This is what I mean when I defend piracy, there is some stuff that for any given reason is impossible to get or too complicated, or too damn expensive, thank god for the scanners that compile all these marvelous things for people like me. How else am I supposed to get a copy of Wertham´s Seduction of the innocent? Scanned my friend…scanned.

P.S: When the scanners don´t deliver I have my brother Ronnie to take of me. He got me two books I was crazy for as birthday presents, Icons: the Jim Lee art for DC comics and wildstorm and the all pencils version of Batman HUSH. Amazing stuff from my amazing brother. Good times ^_^
Posted by Lisandro Di Pasquale at 11:38 PM No comments:

Email ThisBlogThis!Share to TwitterShare to FacebookShare to Pinterest
Labels: about me, news, rambling man, words

Posted by Lisandro Di Pasquale at 1:23 AM No comments:

Email ThisBlogThis!Share to TwitterShare to FacebookShare to Pinterest
Labels: about me, broken, español, words

My own RED RING of DEATH!

Yes, this is what you get for being optimistic!

OMG! This is like the worst thing ever!! This and finding your spouse (or couple, no judgement here, what am I, the marriage police?) in bed with someone else. Someone else of your same sex, that´s a given, because let´s face it, if you are a chick and you find your man with some tramp you should have thought about that when you refused going down on him, you know? If you´re a dude and you find your woman with some guy, well man, that sucks for you…but what if you have a really hot wife and you find her in bed with some other hot chick, huh? How cool would that be? Imagine you´re married to Scarlet Johanssen and you find her in bed with Angelina Jolie, there´s no losers on that scenario—right? Right on! Gimme five!! And what if you find your wife (who suddenly gained like 40 pounds) in bed with some guy that is too ugly for his own sake? Please, we all know that wasn´t working for anyone. Besides, that´s probably the only chance that guy will ever get laid without being arrested for looking out for hookers, and you haven´t even touched the bitch for over a year by now! So is that bad? NO, this is bad! I haven´t got to play Modern Warfare 3 or Battlefield 3, and I was just getting all warmed up to take a trip to Arkham City…AND NOW THIS???!?!?!? You gotta be frakin´ kidding me! So this is the worst thing that could possibly happen to anyone besides finding your girl in bed with someone else, or…I don´t know…getting home and finding your kids chopped down to pieces because the bitch you live with went berserker on their asses. But I wouldn´t know about that, my bitches are running low and I have no kids…my fraking XBOX just died!!!
Posted by Lisandro Di Pasquale at 11:27 PM No comments: 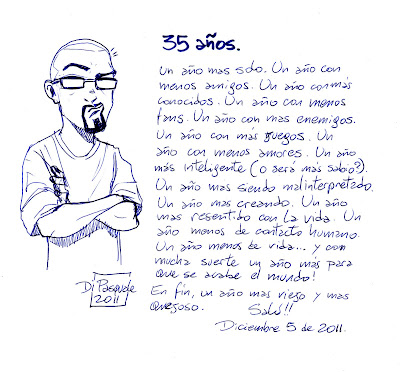 Posted by Lisandro Di Pasquale at 1:34 AM No comments:

Email ThisBlogThis!Share to TwitterShare to FacebookShare to Pinterest
Labels: about me, broken, español, sketchbook, words 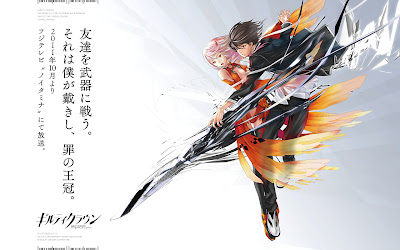 This is what I´m watching right now. A new anime about the same thing all animes are made about: a young japanese guy that borders the autistic meets young super hot chick and fall immediatly in love with her, but he won´t say anything to her because he´s such a tool. Bad guys of the goverment against a rebelious lot and some mecha in between them. Nothing new there, think of it as Eureka Seven meets Evangelion. Characters are cool and the overall tone of the series seems good enough. Plus I really like the visual aspect of it. Go check it out.
Posted by Lisandro Di Pasquale at 11:06 PM No comments: