This is a little piece I wrote a long time ago. Sometimes I just get inspired and start writing things like this, exorcizing the creative ghosts that live inside and pouring them into paper. There are a few more like this, very few in English and a lot of them in Spanish, in time they will see the light. I just hope they are not too boring.

Since my early childhood comics have always been an important part of my life. Even when I was too young to read my grandpa will buy me “The Smurfs”, with the subsequent years and the benefit of reading, other things came along, “Mortadelo y Filemon”, “Zipi y Zape”, “Sacarino the bell boy”, the magazine “Fuera Borda” (all from Spain) and the Argentinean editions of “Transformers”, “Thundercats”, “Challenge of the Gobots”, “Robotech” and “Mazinger Z”.

As time went by, the seed of creativity started germinating in me, and I started having the urge to make my own drawings. I guess that like everything in life, there is a time when you want to start making your own thing. It’s like having a guitar, you start playing, and then one day you listen to Metallica and the next thing you know you want to be the next James Hetfield.

At first I started copying from the comic books, until I got a hang of it, sort of. I started doing little strips, with made up characters that only I knew, little stick figures or funny animals, but one day, walking by a newsstand I had an epiphany. Sitting there, among the other magazines, there was a Batman Issue, looking my way. We saw deep into each other…my fate was sealed.

In those early years my only goal was that of being a comic book collector, so with that in mind I will buy everything published by “Editorial Perfil” from Bs. As. They will print a bunch of DC books, including Batman, Superman, Flash (under the nefarious name “Flush-Man” because another publication held the rights to the name Flash) and my two favorites, Justice League America and Europe.
It was then and there that I realized that a comic book was much more that just a bunch of drawings, that it was actually a universe filled with possibilities. That a story with really fleshed out characters was being told.
I was knocked out of my feet just thinking about the endless possibilities of this particular medium.

I decided it was time to start a collection that allowed me access to whatever it was that I founded motivating at that particular time. And so I did, but a flood took most of the books I possessed at the time. That teached me a vital lesson, never let anything you value at floor level. It took me a couple years to recover what I had lost, and still there were a few things I could never get back, but in their place new and exiting things made into my life.
This time I was decided to keep my re-built collection away from water’s harm, and to that end I placed all my books in a high place and kept it that way ever since. To this date the volume of books has increased exponentially, to the point of including books entirely made by me. Which might sound kind of silly, but to me is a big deal.

As the need to express my creativity took over I started to experiment making little cartoons and things like that. Early on I realized that my path laid with the art side of it. Writing was hard (it still is), but there was something about drawing, it was like I could feel it flowing out of my hand and into the paper.
With some time and a lot of practice I made it into the small leagues. I started to get some work published in a local newspaper. I was doing some illustrations to accompany feature articles, and every now and then I would put out a comic strip called “Fede & Rocky” about a kid and his talking dog.
That lasted a couple of years before it was time to move on in search of greener pastures and bigger fields.

They say that being an illustrator is probably the second best way to go hungry; the first one might be being a poet. They are right. Back then doing this was just like having a glorified hobby, the pay was almost non existent, and all I got from it was minimum recognition. I was as famous as the paper’s run allowed it, which wasn’t much.
Today the situation is pretty much the same. Think of it this way, for every artist working on the field there must be at least 20 trying to break in. Now, take a look around and see how many people is actually working right now (a lot), multiply that number times 20, do the math, that’s A LOT of people. This is a highly competitive field, and not in terms of quality (sadly) but because at any given time you have 100 people chasing the same paycheck. 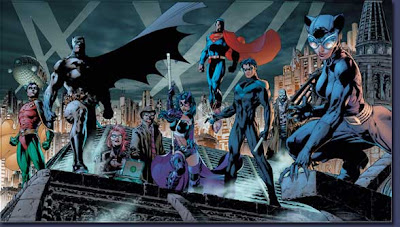 So, it was ’97 (maybe ’98) and I was getting ready to move to Montevideo. I had just finished High School and was ready to start College. That summer I decided that it was time to give comics a chance and starter working on what later on became my book “El Angel Negro” (Black Angel). As I was working on the material I was also trying to wrap my head around the concept of getting a book published. Lucky for me I had an issue of WIZARD magazine that featured an article on how to print and get your book out made by the people of CHAOS comics. My English wasn’t very good at that time (some might argue that it hasn’t improved much), but armed with a dictionary I went to translate the article word by word and took it as my bible on the subject.

Then I went around looking for budgets and places to print the book. In a town like Carmelo it came down to three places. Obviously I went with the cheapest one, and that’s when the sleepless nights began.
Posted by Lisandro Di Pasquale at 5:01 PM

Email ThisBlogThis!Share to TwitterShare to FacebookShare to Pinterest
Labels: about me, rambling man, words