SKYLINE [Don't look up alright, hell.. if you can don't look at all] 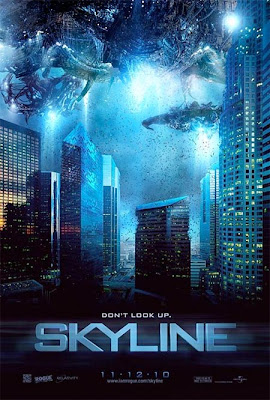 When I saw the trailer I remember thinking: “wow, that looks cool, it might be a good movie”

Boy was I wrong.

This his, hands down the stupidest movie I’ve seen this year. Not the worst mind you, but the most idiotic way of spending money I’ve seen in a long time. The worst movie of the year title goes to ‘The A-team’.

I still don’t know what the story of SKYLINE is all about. We are invaded by aliens that kidnap us to eat our brains. So I’ll take it that now we have taken the concept of the zombie one step further. Now they come from outer space.

Wow, I mean what a waste of resources and time, I demand that hour and a half of my life back. On the bright side, it wasn’t as long as the other stupidest movie ever, Avatar, that took three hours of my precious life away from me. I tell you, I’d rather die smoking than wasting my time in movies like this.

This is so based on the visual aspect of filmmaking that instead of Skyline it might as well been called “INDEPENDENCE DAY 2”. It’s equally stupid, poorly acted and filled with eye candy as that dreaded and miserable excuse for a movie as the other one.

It’s worthless to spend words talking about this piece of crap. The only thing I can suggest is for you to stay away from it for as long as you can. I wish they had placed a warning in the beginning saying something:

Disclaimer: the following movie was made for no reason. We didn’t have an idea of what we were doing other than showing up some neat special effects. Be warned that after it is over you might feel the need to punch something. As for the ticket money, well…we tricked you out of it, now it’s ours bitches.

Jesus, I was expecting to see the name Alan Smithee at some point, because let’s be serious, Who in his/her own mind would like to be associated with this?
Apparently they all did. Brett Ratner was somehow involved. That’s about all you need to know. I wish I’d known before hand just to skip it at once.

My advise: Don’t watch it under any circumstances. Not even if you like BAD movies.
I’ll recommend it as much as playing with a vile containing a sample o ebola.

We keep complaining that there are no new ideas in Hollywood (to me this is clearly not an original, because as I said before its Independence day 2) but if you plan to release new ideas like this one, I’ll happily sit and wait for the remake of ‘Gone with the wind’.