Here's a little peek at what goes into making an issue of the book.
It all starts with Ronnie's script. Right after I get it I make notes on it about what works and what might need some redoing. I usually shoot it back to Ronnie so he can fix it and then I will get a new draft. Sometimes I just work stuff out as I see fit, making changes that will allow for a better pacing or that will improve the storytelling. Here's an example: 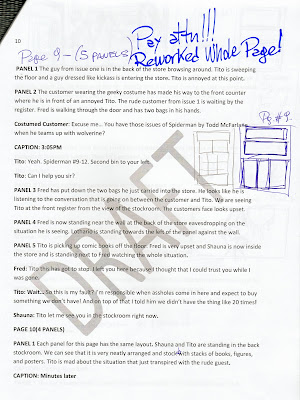 Then I start right away with the breakdowns and the thumbnails. I always like to work this way, it allows me to envision the story as a whole and as the thumbs start piling up I can actually see how the story flows. 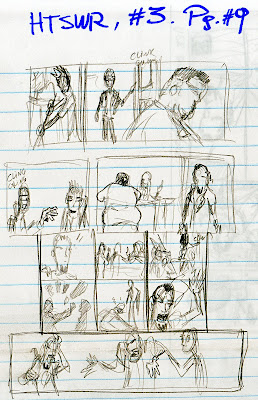 Next is the pancil stage, where I take the thumbnail and start making the art on the actual board. Sometimes I re-size the thumbs and light trace them into the board. Here is where I make whatever changes need to be done to get the best out of the art. Many times the changes are very noticeable as I might change entire panels or camera angles. 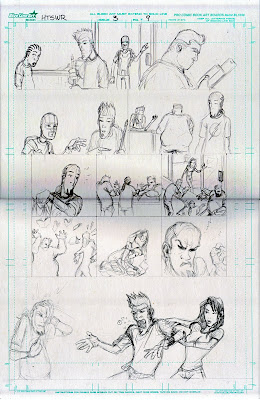 Finally, the inks come into the picture. I'm the first one to admit that inking is not my strongest suit. Not only I found it redundant with today's technology, I just don't like to do it because it's drawing everything twice. I like to do pretty tight pencils but sometimes I can do some things looser because I'm the same one that is going to ink it. More changes might be made at this stage, and here is where the blacks are laid down. 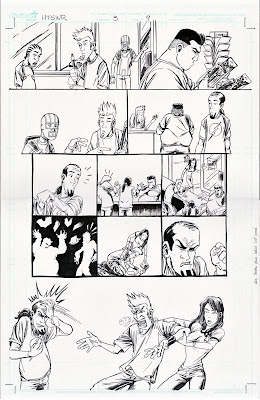 The last stage comes after scanning the page and tweaking it digitally. Sometimes things are added as in post-production (details, repeating backrgrownds, effects) and then it's straight to Illustrator to do the lettering. After all that has been done, the page is complete and ready for print. 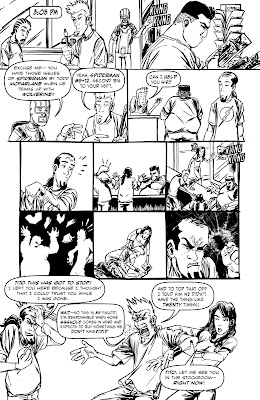 For most of the issues I keep thumbs, pencils and Inks, at some point I will put all of this into a cohesive sketchbook. I'm rounding up issue 5 so hopefully I'm gonna be putting up some pages soon as a preview.

More to come.
Posted by Lisandro Di Pasquale at 11:17 PM

Email ThisBlogThis!Share to TwitterShare to FacebookShare to Pinterest
Labels: about me, comics, HSTWR, sketchbook, words